Leonardo DiCaprio received the nonprofit Screen Actors Guild Foundationâ€™s single â€œActors Inspiration Awardâ€ at the SAG Foundation 30th Anniversary Celebration on Thursday, November 5th at the Wallis Annenberg Center for the Performing Arts in Beverly Hills. The award highlights his career achievements as a five-time OscarÂ®-nominee and eight-time Screen Actors Guild Award nominee who has earned acclaim for his roles in The Wolf of Wall Street, Blood Diamond, The Aviator, The Great Gatsby, Inception, Shutter Island, Django Unchained, Revolutionary Road, J. Edgar and Whatâ€™s Eating Gilbert Grape. The award also recognizes his philanthropic work as Chairman of the Leonardo DiCaprio Foundation (LDF) whose mission, since 1998, is to protect biodiversity, conserve the worldâ€™s oceans and forests, and bring attention to climate change. In collaboration with a broad network of environmental leaders, organizations and philanthropists, LDF has awarded over $30 million dollars in grants and supported over 70 high-impact projects in more than 40 countries around the world.

â€œThis year marks an exciting time for the SAG Foundation as we celebrate 30 years of giving back to SAG-AFTRA members and the entertainment industry, as well as an international audience of children, parents, and teachers,â€ said SAG Foundation President JoBeth Williams.

To commemorate our landmark anniversary, weâ€™re excited to honor Leonardo DiCaprioâ€™s outstanding achievements with our Actors Inspiration Award. With beloved and acclaimed films as diverse as Titantic to The Wolf of Wall Street to his latest film The Revenant, Leonardoâ€™s career is a gold standard example to his craft. Also, his work with LDF demonstrates his commitment to conservation and protection of our environment. — Â President JoBeth Williams

Said DiCaprio, â€œIt is an honor to be recognized by the SAG Foundation, a group which does so much to support, sustain, and educate my fellow actors and give back to the entertainment industry, as well as the work it has done to advance childrenâ€™s literacy. As the SAG Foundation moves into its next 30 years, Iâ€™m proud to be a continuing supporter and contributor to its legacy and its future.â€ 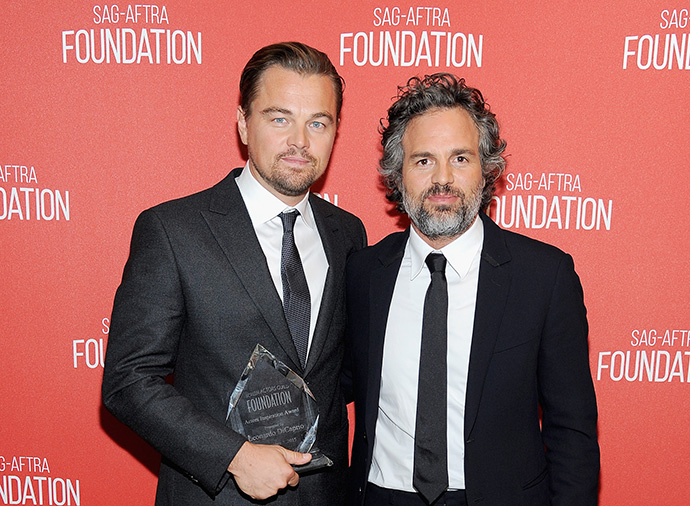 In 2015, the Screen Actors Guild Foundation celebrates 30 years of giving back to the professionals of SAG-AFTRA, their families and communities. The nonprofit provides vital assistance and educational programming to the professionals of SAG-AFTRA while serving the public at large through its signature childrenâ€™s literacy programs. For 30 years, the Foundation has granted more than $17 million in financial and medical assistance through its Catastrophic Health Fund and Emergency Assistance Programs, and $6.5 million in scholarships to SAG-AFTRA members and their dependents. In addition, the nonprofit has offered 5000 free educational workshops, panels and screenings to union performers nationwide and its childrenâ€™s literacy programs have brought the love of reading to more than 66 million children worldwide.

Leonardo calls for climate action at Mayors summit in Paris

Leonardo addresses Mayors and local leaders gathered in Paris on the importance of switching to renewable energy to tackle the climate crisis.

Leonardo joins artists and public figures from around the world to celebrate the adoption of the UN Sustainable Development Goals at the 2015 Global Citizen Festival in Central Park, New York.

In January, Leonardo DiCaprio attended the World Economic Forum in Davos, Switzerland to receive the prestigious Crystal Award. The award is given to artists and cultural leaders who are helping to address the world’s humanitarian and environmental challenges, including climate change.

Leonardo calls for climate action at Mayors summit in Paris

Leonardo addresses Mayors and local leaders gathered in Paris on the importance of switching to renewable energy to tackle the climate crisis.

Leonardo joins artists and public figures from around the world to celebrate the adoption of the UN Sustainable Development Goals at the 2015 Global Citizen Festival in Central Park, New York.

Leonardo and the Leonardo DiCaprio Foundation announced today they are joining over 400 institutions and 2,000 individuals participating in the pledge Divest-Invest pledge, along with governments and investors from 43 countries.

LDF held its annual fundraising gala in St. Tropez raising more than $40 Million to protect Earthâ€™s last wild places and implement solutions to preserve and save the environment.

Leonardo DiCaprio will play the role of Hugh Glass in upcoming film The Revenant, shot entirely with natural light in the remote wilderness of Canada.

In a continued effort to preserve and protect the future of our planet, the Leonardo DiCaprio Foundation is providing $15 million in grants to organizations implementing innovative and impactful environmental projects around the globe.